Stormwater managers—at the federal, state, and local levels—are hesitant to make big investments of time and money without having access to key data. As a woman-owned small business (WOSB) with clients across the country, StormSensor Inc. proposes a simple strategy.

By combining a network of low-cost sensors with software to manage the data they generate, StormSensor’s technology can collect and track flow rates, water volume, and water temperature throughout a region. Sensors are installed inside sewer lines, where they take measurements every five to 10 minutes and wirelessly transmit the data. This in turn helps stormwater managers gain real-time insights on events as they occur, track trends over time, and make critical decisions based on data. 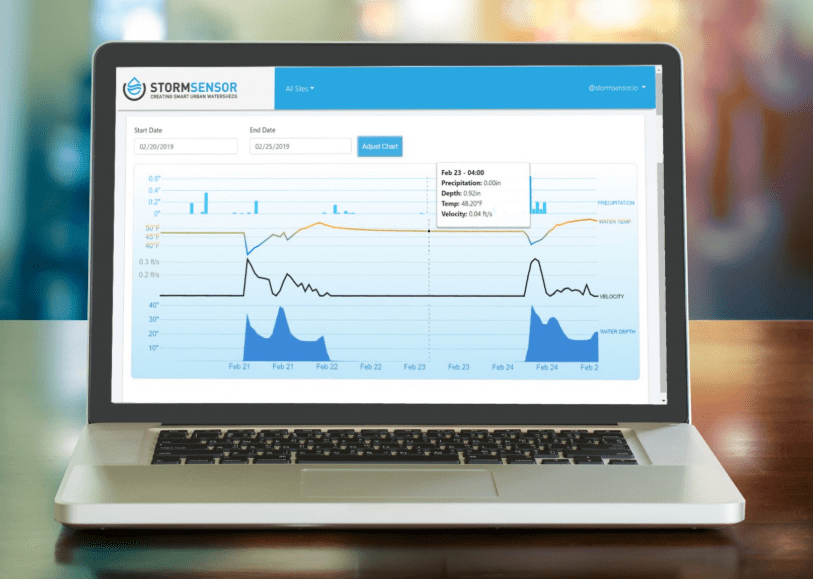 We sat down with Erin Rothman, CEO and founder of StormSensor, to learn more about this innovative company that’s leveraging new technology to solve water infrastructure challenges in cities across the country.

Tell us about your company?

So StormSensor started as a joke, maybe back in 2010 or so. I was a vice president at a consulting company and we had just brought in a stormwater group to work with people along the Lower Duwamish Waterway which is our river in Seattle. We brought in a team but as a company, we started losing money for the first time in our history which didn’t make any sense.

So, I talked to my team, they were doing the fieldwork, and I asked them what was wrong, in that they’re going out to sites, they’re so busy, but we couldn’t bill their hours, we had to write off their time. And they said that every time it rained at the office, they had to go sample their sites, but just because it was raining here, it doesn’t mean it was raining there. So they’re going out like four times before they could bill their time, and I said that’s the stupidest thing I have ever heard, why don’t we just have a rain gauge that texts us when it rains and they said, why don’t you go invent that and then I said, I will. I’m going to call it StormSensor.

And that’s how the idea started even though we do not offer rain gauges in that context. But long story short, back in 2014 and 2015, I decided that maybe StormSensor could be a thing that I did, although it was a very big step for me because I am a scientist and at that time knew nothing about hardware and nothing about software, so how was I supposed to build this thing.

I went through a product management course, I met my first co-founder in that class, we incorporated in 2015 and then decided to figure out how to build it. We started to talk to customers and learned from cities that what we were building they didn’t need to know. They just needed to know how much water was going through their pipes. So we focused on flow, kept temperature as the quality parameter, and you’ve got a product.

How has your product evolved to changes and evolving problems?

We had started with industrial and construction compliance as our idea. We were trying really hard to build a cost-effective sensor that could monitor all these different chemical parameters. It’s really hard, it’s really expensive, and we were not successful, which was okay because it turns out that we didn’t have to be, so I guess we stopped trying when we learned that we could monitor flow.

We were able to evaluate the capacity of given systems, we were able to monitor urban flooding, we were looking at backflow conditions. So along surface waters of rivers, lakes, and of course oceans, when you have a storm coming in and now the winds and the rain are blowing the water inlands that water is going into the storm system and often into the treatment system in the sanitary plant, which affects capacity issues there and then causes overflows. So we were able to track and monitor all of that and now we do everything in realtime, but we are also in the process of developing predictive analytics that will be available on a spatial basis as well.

Can you tell us a little bit about some of those innovations that you do have coming up?

For sure. So, of course, the predictive sewer we’re building and testing right now, the algorithms to predict combined sewer overflows so that just pretty standard that keeps us competitive. We are also predicting backflow conditions, so pulling weather and the flow data that we have within these systems into different algorithms, we have a storm sensor constant that we’ve developed that basically is kind of a location-specific quantification of flow dynamics that you can apply to your system as a whole, so we’re working with a number of different consultants on that problem right now.

So the applications, once we have the data, and the exciting part is that — again the density of the data is really awesome because we’re able to track and identify variability within these systems. So pulling all that together, building the predictives on that and then also presenting it spatially to our customers as well is coming in October.

It was great speaking with Erin. Be sure to learn more about this innovative company by checking out their complete GovShop profile.