What’s new in R&D in the realm of augmented reality? According to “9To5 Google,” Samsung is in the process of creating their latest model of wearable AR spectacles, called Glasses Lite. In the article, videos show how the model is wearing the glasses to play a car video game while a Samsung phone is docked to a controller accessory. The model then walks outside and activates “Sunglasses Mode” to hide the AR displays and tint the shades. 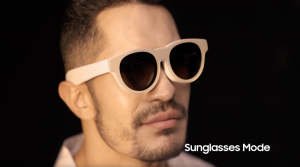 These wearable computers include features such as an “AR Office,” “Holo Call,” and “AR Simulation.” Augmented reality is changing and enhancing the way people are doing life through these real-world environments, with just a touch of visual sensory modalities, as seen with Samsung’s Glasses Lite. More information on emerging technologies and augmented reality can be found on GovShop, a free supplier and contract intelligence platform that provides comprehensive data across all markets. As part of the ongoing effort of Public Spend Forum to connect buyers and suppliers in emerging technology fields, GovShop’s list of suppliers in virtual reality and other emerging technologies is accessible here.